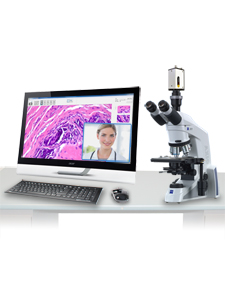 Can India leapfrog AI in healthcare through digital pathology?

India is marching on a digital health journey through the launch of the National Digital Health Mission (NDHM). It lays the foundation of digital health infrastructure which will enable running integrated programs of the future. Being a centralized structure, will contribute to data integration and also help in uncovering macro and micro trends.

Experts opine that AI is expected to change how we live, something similar to what the arrival of the internet did. One interesting AI application in healthcare can be through digital pathology.

Pathology is one field that has not changed much since its beginning. Most pathologists still use traditional microscopes. This not only creates bottlenecks but also hinders their efficiency due to the reduced role of digital tools.

However, with the increasing efficiency and reducing cost of digital scanning of slides, the wave of digital pathology is on the anvil. There have been increasing efforts across the world to adopt and digitize the pathology workflow. Many elements of analysis can be done on digitized slides. Different AI tools can be trained on digital images and various levels of automation can be done using deep learning.

Since the entire world has just begun, there is a moment of opportunity for India to leapfrog others because of the following reasons:

However, there are many advantages India has that make the case for stronger push for the digitization of the pathology in the country-

Digital pathology is a space where the race is still wide open in the world. India has the golden opportunity to lead the race if it plays its cards right. The first step in the form of NDHM has generated the buzz, and it seems to be on the right path. A collaborative approach between government, private players, and startups as an innovation catalyst can emerge as a winning combination for the country and for the world. Digital pathology is one domain that should be on everyone’s radar. India should leverage its big base and its unique strength in numbers to dominate this AI arms race.

Disclaimer: Author is a product strategist/manager for a startup creating a suite of customizable, modular, global digital pathology tools. Opinions expressed are personal opinions of the author.